Back to the overview
Benedikt, December 22 2021

Finally, cross-country skiers are able to do power-based training. Our technology estimates average power per cycle (Watts) for the classic and skating techniques, based on our usual setup consisting of one single GNSS-IMU sensor worn on the upper back. In this post, I outline how we compute the skiing power and demonstrate the validity and accuracy of our power estimation on two examples: one for an incremental test and the other for ski testing. 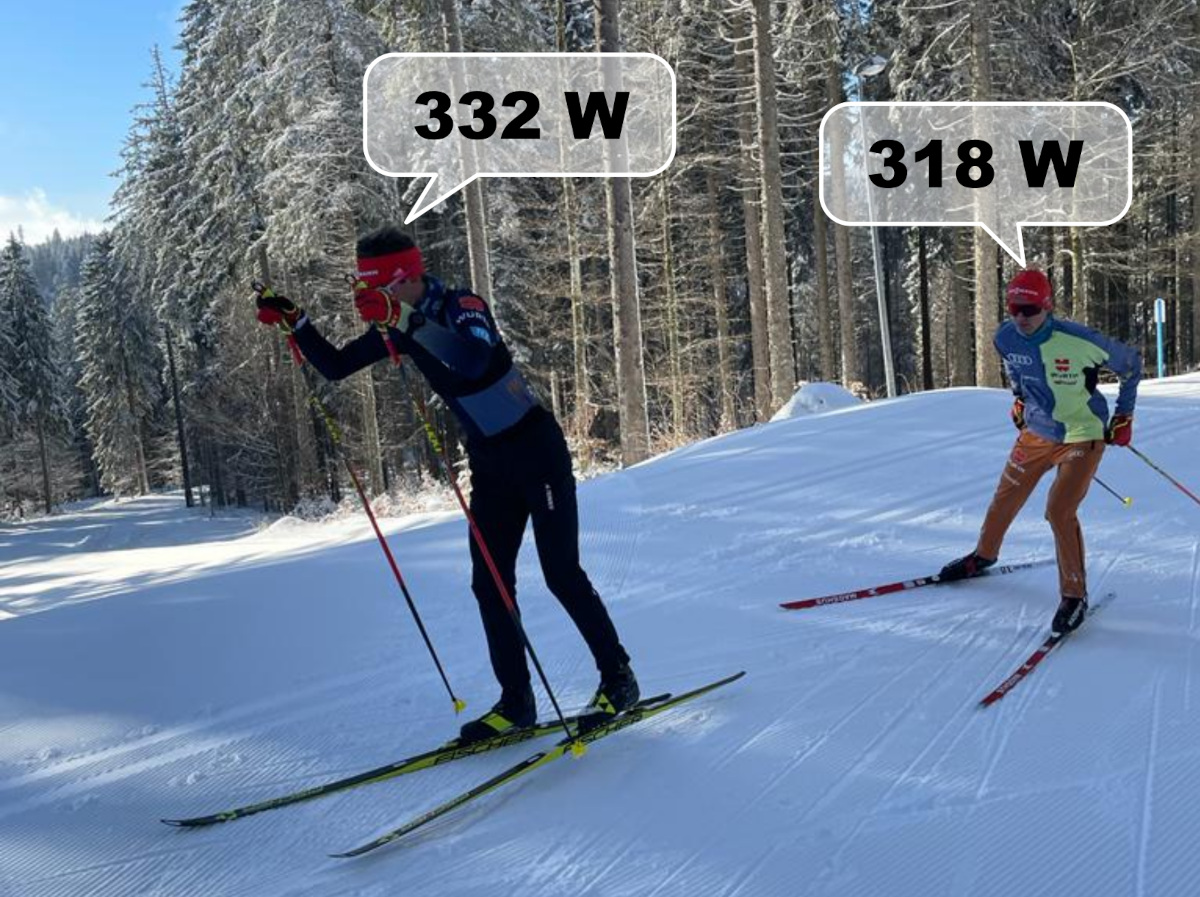 How we compute power

Estimating cross-country skiing (mechanical) power during daily training is not so easy. Else, everyone would have already done it and we would not be the &quotfirst" to offer this feature (yes, I know, Garmin has a power estimation feature: a couple of months ago, I wrote a LinkedIn article about how they are likely to do it)

In order to estimate power, one needs to be able to accurately estimate all the dissipative (friction) forces. These are the forces that slow you down and need your power (besides gaining elevation). There are two main dissipative forces present in cross-country skiing: air drag and ski-snow friction.

Having said that, and without going too much into detail, in order to estimate the cross-country skiing power, first, our system measures the skier's posture and his speed to estimate the air drag 200 times per second. Second, it computes how much energy the athlete looses in every cycle, based on the changes in the centre of mass' instantaneous speed and position (also measured 200 per second), and use this information to estimate an average ski-snow friction. Finally, there is some physics and math involved to convert forces into energies and power, and vice-versa and some more, and finally we obtain the average skiing power.

How valid and accurate is our power estimation?

This is a very hard question and a proper scientific validation would be needed. However, we did many tests and have a lot of testing data to investigate whether the measured power is consistent and makes sense. So far, we have found very promising results that are consistent with the physics of skiing and with external conditions. For example:

An incremental performance test was concluded on a 1.3 km track consisting of two downhill sections (start until 450 m and 1000 m until finish) separated by one uphill section with an elevation gain of 24.2 m. Skiing speeds were controlled by a skidoo. Speed started at 10 km/h for the first lap, increased by 2.0 km/h every lap to reach 24 km/h for the last lap.

Elevation profile of the track skied during the incremental test

The overall results, including both downhill parts, are shown in the table below. Average skiing power (including the downhill sections) for the slowest lap was 143 W and reached 311 W for the fastest lap. We can also nicely see how the power lost to snow friction and the total snow friction work is increasing with speed. For this athlete, track profile and snow conditions, the average power "lost" in ski-snow friction is approximately 50% of total average skiing power and it remains almost constant over all the speeds.

In order to better understand how power and skiing speed are related the figure below shows skiing speed and average cycle power for the uphill part. If speeds are higher then skiing power are higher as well. Maximum cycle power reached over 800 W but could only be sustained for 6 cycles. Without further explanations I also invite you to analyse the cycles with considerable speed gain and speed loss and how the corresponding power changes. There is a lot of information and knowledge that can be gained from this very simple example.

There is not always the same power difference for the same skiing speed difference. This is due to different skiing techniques, different cadence, and slope. Sometimes the athlete is more efficient than other times. 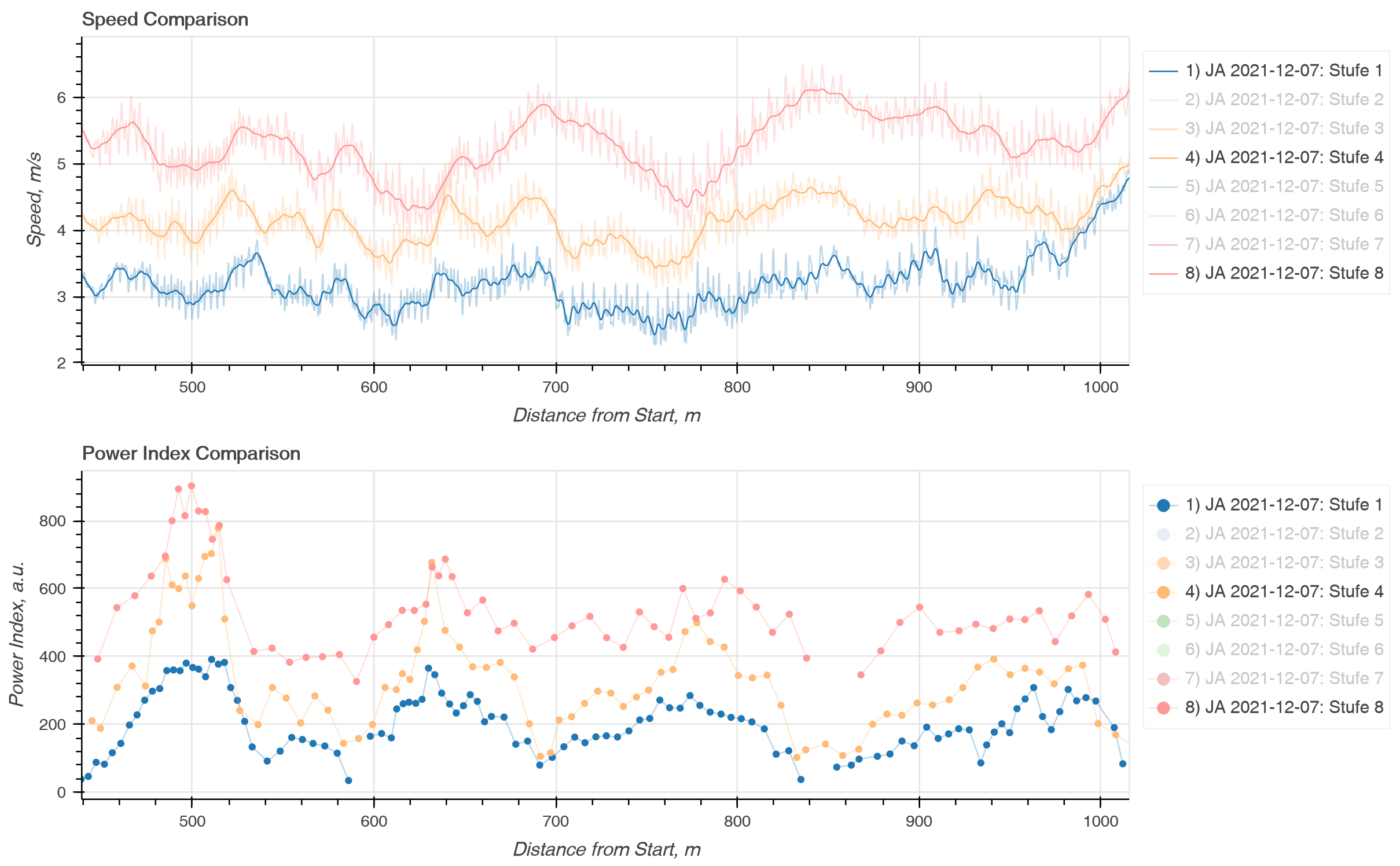 The ultimate reliability test is ski testing: does our method produce consistent results with ski tests? The answer is: yes, it does. Two ski testers were testing three pairs of skating skis. The skis were waxed exactly the same but had a different base structure and a different flex/tension (but were the same model). The ski testers had no information about how each ski was prepared and which ski was supposed to be the fastest. Air temperature was around -5°C with light snowfall and no wind.

First, a regular gliding test was performed, with randomized ski order. The ranking, from fastest to slowest was: #2, #1, #3.

Second, very "untraditionally" for ski testing, a rather flat loop (7 m of elevation gain) of 720 m length was skied at medium to high intensity, once with each ski. The ski testers were instructed to ski each lap with the same speed and use the same sub-techniques in the same sections. The results from our power analysis are shown in the table below.

For both ski testers the first lap was the fastest lap. This was also confirmed by the highest average power. But of course, the first lap was not necessarily skied with the fastest ski. And this is where it gets interesting. When looking at the power lost to snow friction and the corresponding work performed, for both athletes, despite different skiing speeds and ski orders, ski #2 was the best ski and ski #3 was the worst. These results confirmed the results from the "traditional" gliding test.

As a side product of skiing power estimation, our system must accurately estimate the ski-snow frictions. The results from this ski tests showed that our estimates are reliable and can correctly measure subtle differences in ski friction between different skis. The results were consistent between the ski testers and was able to take into account slightly different skiing speeds.

The system could even be used to assess the ski performance during races, giving the waxing team precious information about how a given ski is performing in the course of a race (for example whether friction is increasing or decreasing over time).

We made cross-country skiing power computation possible for every-day training and for competitions. Based on the athlete's posture and movement our system automatically and reliably estimates the dissipative forces from air-drag and ski-snow friction and can estimate the average skiing power.

This new feature opens up many new training applications. Besides the ability to finally have a means to control power output I see a huge value for technique training: for a given target speed, how can the athlete optimize his skiing technique to minimize power and become more efficient?